For many years some of us were extremely fortunate to have come under his commanding influence and guidance. He was the most charismatic and inspirational karate instructor and mentor you could ever wish for. Enoeda Sensei was at the forefront of the worldwide karate evolution that started in the mid 1960’s here in England, Europe and the rest of the World, when he was part of a team of high ranking karate instructors that the then Chief Instructor of the JKA Nakayama Sensei sent to all parts of the World to spread the gospel of Shotokan Karate. 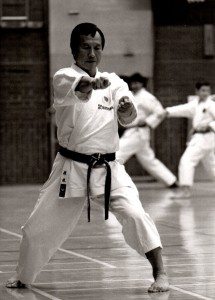 Enoeda Sensei was always the ultimate perfectionist in his karate performance and teaching methods as those of us who were fortunate enough to have experienced can testify. You learnt far more quickly under his tuition than any other instructor I have known.

His karate was so powerful, as was his spirit, and an aura always seemed to surround him when he entered the dojo.

Twelve years have now passed but the strength of his influence has not diminished and is still very much with us in our daily training as strong as it was back then.

We shall never forget how great a karate instructor and man he was, or, the memories we have of him.