It’s not often that you get asked to just pick up a tiger from a London Airport and transport it to its new home at London Zoo – that’s just what happened to SKC England squad coach a few weeks ago.

The tiger has rather a special meaning to some of us at SKCE because it is synonymous with our famous late instructor Sensei Keinosuke Enoeda 9th Dan who was known as the ‘Tiger of Shotokan Karate’. 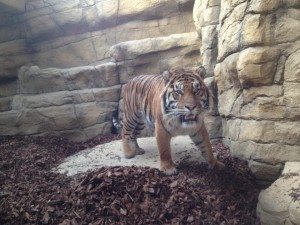 Here Sensei Graham explains about Jae Jae the Sumatran male tiger who is one of only 300 remaining in the world and an endangered species.

Jae Jae was relocated last October from Akron Zoo, Ohio USA to take up residence here at ZSL London, with a female named Melati. She came over from Perth a short time prior to Jae Jae to start a breeding program to help with the numbers of Sumatrans, only approx 300 left in the world.

They are both 5 years old and now live together in a new £3.6 million enclosure called Tiger Territory where things are looking good. By nature Jae Jae is a very chilled and laid back cat who knows he is very handsome, a bit of a show off. Melati is more of a shy girl who is VERY feisty.

I was lucky enough as you know to meet Jae Jae at Heathrow after his arrival on one of our DHL aircraft, load him on to my DHL truck and take him to London Zoo.

I went to see them a few weeks ago and they are settled in nicely, attracting a lot of visitors. I will call their Press Officer to find out about the possibility of SKCE sponsoring Jae Jae 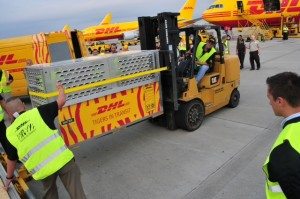 Would you and your Club like to help sponsor Jae Jae ? If so please let your Club Instructor know and once we have this approved by the PR people at London Zoo we will tell you how we shall go about this.

Sensei Enoeda was famed for his fierce tiger like fighting qualities and Jae Jae is fighting for his breed to survive. 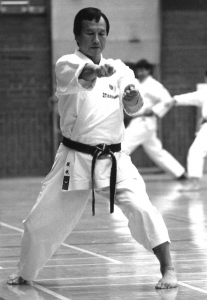 Just like the endangered Siberian tigers the subject of a current BBC TV programme ‘Operation Snow Tiger’, the Sumatran tiger is even more at risk of extinction so I hope you will think that helping to save these endangered tigers is a very worthy cause.