During two sessions in December, SKCE selected its 2018 Squad.  The Squad consists of three groups, Junior, Intermediate and Senior Squad.

Meet Some Of The Squad

If you like putting a face to a name, here are some of the SKC England 2018 squad members.

Leon Gordon started training in martial arts at 10 years old. He began with judo. However, within a few months of starting judo, he decided he wanted to be able to train in something which involved punching and kicking…

So, Leon started training with Sensei Eric Pich at the age of 10 alongside other notably successful competitors such as Mohammed Salih and Roisin Campbell, at the Vale Farm dojo in Wembley.
Leon eventually gave up judo (he began playing semi-pro football!) but he had by then won a place on the England Squad and was ranked 2nd in the UK. 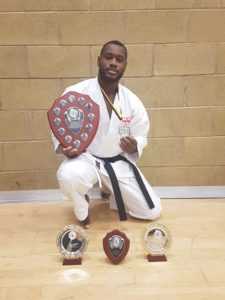 Over the years, Leon won many, many karate competitions including,

Leon now wants to pass on his knowledge to the next generation and as Squad Coach for SKCE, is committed to helping to develop future champions.

The Latest News On All Things 'Squad'