We experienced an unexpected and disappointing start to these Championships when at the very last minute 3 of our Senior male competitors had to withdraw.  As you can imagine apart from the effect this had on their individual events there were major consequences for the Senior team events especially as we had high hopes for success in some of these.

Fortunately the combined England squad soon put this behind them as they trained daily with a great deal of determination to overcome this disappointment.  It was good to see the whole squad training hard from the youngest members, especially those who were for the first time soon to face the biggest challenge of their young karate life.

Under the guidance of coach Sensei Graham Mercer, the whole combined England squad soon bonded so it produced a very positive approach leading up to the championships.

There were no apparent nerves, or, if there were it was well concealed,  and meant that on the first day of the World Championship, you would have thought England still had a very experienced squad eager to get performing.

The first day was primarily kata competition however there were a few kumite events late in the day.  The kata eliminations and then finals were the order of the day with most of our England team acquitting themselves well.  However, quite soon they were to experience some rather inconsistent judging that always seemed to go against the England competitor particularly when up against the strong contingent from Eastern European countries.

It’s a pity these judging inconsistencies produced some very unfair results at times especially as there were many fine and definitely more deserving performances from others.

I don’t consider that overall we achieved what we really deserved but having said that the England squad provided some very creditable performances.

In order to demonstrate to the 90 referees and judges that were in attendance our Senior referees Sensei Eric and Sensei Peter were paid the huge compliment of both being appointed as Tatima chiefs in charge of two out of seven areas for the duration of the competition.  Hopefully their higher standard of refereeing was noticeable to other and there will be an improvement in the standards of refereeing in the future.

I don’t like to single people out because the England Team can all be very proud of what they achieved but young Josh Han who won individual gold for the second successive year.  Josh was so outstanding and head and shoulders above every other kata performance of his age group that there was never any doubt about his result.  Also, 11 year old Ellen Lewis who in her first international competition came away with 2 bronze medals.

Team kata also produced some credible performances but still we deserved better.  There needs to be more allowance for the different interpretation from judges that is rather inevitable due to the wide variation that has occurred over the years in the teaching of kata.

By and large Shotokan is expected to follow the teaching of Nakayama Sensei, as indeed SKCE do, but sadly this cannot be true of many of the judges obvious inexperience and inevitably there is a large variation and misinterpretation.

At the end of the day Englands efforts still produced 1 gold and 12 Bronze medals which considering our squad was only 30 or so strong compared with other countries, with 4 or 5 times as many competitors, was a very commendable effort.

The competition finished rather late on Saturday evening primarily because some of the kumite events were bought forward from Sunday.

Day 2 arrived which was exclusively kumite and all 7 areas were soon in fast and furious action from the word go.

This was the day we had originally expected to do very well had it not been for the enforced withdrawals with our Senior men.

Nevertheless everyone performed well and gave their best although some suffered due to dubious decisions some of which were clearly quite incorrectly given.

We achieved 6 bronze medal places during the kumite events but for me the highlight, and the best techniques of the whole tournament were the two superb winning efforts produced by England Captain Leon Gordon.

Two glorious ippon scoring techniques which saw almost everyone including the partisan European crowd on their feet applauding.  These inspirational techniques proved the undoubted quality that English karateka are capable of producing.

The England squad comprised of competitors from Colin Putts SKDUN, Mervyn O’Donnell’s Rengokai Karate and the following from SKCE were:-

Overall I think we all thoroughly enjoyed the whole experience, as did the delighted parents who accompanied us.  They certainly provided constant support and encouragement for all the team not just their sons and daughters.

I was exceptionally proud of the whole England team and group and especially how they conducted themselves and their achievements.

I particularly enjoyed the harmonious relationship created by all the competitors, parents and officials which made up the England team.

Please enjoy the photographs supplied to us by John Makuta of Intedex here at our Facebook page: ShotokanKarateCentresEngland 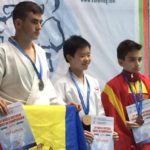 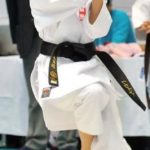